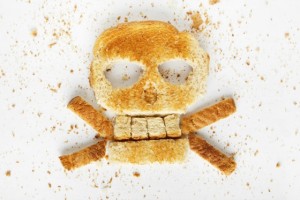 “Gluten-free diets are just a fad.”

“Wheat is only bad for people who have celiac disease.”

If you are one of the unfortunate souls who feels icky after eating food that contains gluten but you don’t have a medical diagnosis to blame, you might have heard one (or all) of the comments above from skeptical people.

I have good news for you: Your days of having to justify your wheat-woes to cynics are over.

The study was led by researchers from the Columbia University Medical Center (CUMC) and is published in the journal Gut (clever name for a gastrointestinal journal, isn’t it?)

Our study shows that the symptoms reported by individuals with this condition are not imagined, as some people have suggested. It demonstrates that there is a biological basis for these symptoms in a significant number of these patients.

Dr. Green is the Phyllis and Ivan Seidenberg Professor of Medicine at CUMC and director of the Celiac Disease Center, so I think it is safe to say he knows his gut-stuff.

Before we go on to discuss the new study’s findings in detail, let’s take a minute to cover what celiac disease is.

What IS celiac disease?

Celiac disease is a serious autoimmune disorder in which the immune system mistakenly attacks the lining of the small intestine after a sufferer consumes gluten.

Gluten is a complex two-part protein found in grains such as wheat, rye, barley, and spelt. The two different proteins that comprise gluten are called glutelin and gliadin. Breads, cereals, and baked goods are obvious sources of gluten (unless they are labeled gluten-free), but they aren’t the only foods that contain the protein – it can be found in many items, even those you wouldn’t expect.

Symptoms of celiac disease include (but are not limited to) abdominal pain, diarrhea, constipation, bloating, weight loss, fatigue, anemia, arthritis, depression, and headaches. There are over 300 symptoms that are known to be caused by celiac disease…but some people with the condition have no symptoms at all.

But discomfort and pain aren’t the only problems celiac disease causes: the immune response that attacks the small intestine leads to damage to the villi, which are small finger-like projections that line the small intestine. The villi promote nutrient absorption, and when they become damaged, nutrients cannot be absorbed properly into the body. Undiagnosed or neglected celiac disease can lead to serious health problems, including osteoporosis, anemia, vitamin and mineral deficiencies, nervous system disorders, pancreatic insufficiency, intestinal lymphomas, GI cancers, and other autoimmune disorders.

There are several serologic (blood) tests available that screen for celiac disease antibodies, but the most commonly used is called a tTG-IgA (Immunoglobulin A) test. If test results suggest celiac disease, the next step is usually a biopsy of the small intestine to confirm the diagnosis.

Currently, the only way to treat celiac disease is by strict adherence to a gluten-free diet.

Now, back to the study…

Many people who lack the characteristic blood, tissue, or genetic markers of celiac disease experience celiac-like GI symptoms (as well as non-GI symptoms including fatigue, cognitive difficulties, and mood disturbances) after consuming foods that contain gluten.

One explanation for NCWS is that exposure to the offending grains somehow triggers acute systemic immune activation, rather than a strictly localized intestinal immune response. Because there are no biomarkers for NCWS, accurate figures for its prevalence are not available, but it is estimated to affect about 1 percent of the population, or 3 million Americans, roughly the same prevalence as celiac disease.

For the new study, researchers examined 160 participants: 80 with NCWS, 40 with celiac disease, and 40 with neither condition.

While the NCWS group did not have the cytotoxic T cells found in those with celiac disease, they DID have markers of intestinal cellular damage related to a severe systemic immune activation.

The study found that NCWS is linked to a weakened intestinal barrier that allows the movement of microbial and dietary molecules from the intestines into the rest of the body. This, researchers suggest, ultimately results in the body-wide immune response that patients saw in response to gluten.

Study participants with NCWS who excluded wheat and related products from their diets for six months saw improvement in their symptoms and effects.

Researchers hope that future studies will allow them to better understand the mechanisms involved in both NCWS and celiac disease.

Study co-author Dr. Umberto Volta, a professor of internal medicine at the University of Bologna, said in the press release:

These results shift the paradigm in our recognition and understanding of non-celiac wheat sensitivity, and will likely have important implications for diagnosis and treatment.

Considering the large number of people affected by the condition and its significant negative health impact on patients, this is an important area of research that deserves much more attention and funding.

What does this mean for you?

For those who are still skeptical (or want inspiration), please read my dear friend Melissa’s personal story about her battle with NCWS and the amazing health transformation she experienced when she removed gluten from her diet.

Wheat Belly: Lose the Wheat, Lose the Weight, and Find Your Path Back to Health

Danielle Walker’s Against All Grain: Meals Made Simple: Gluten-Free, Dairy-Free, and Paleo Recipes to Make Anytime