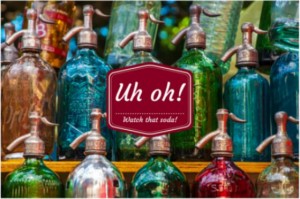 Soda, soft drinks, pop, cola…the fizzy beverage is known by many a friendly alias, but let’s stop sugarcoating it and call these drinks what they are: toxic brews of chemicals, artificial flavors, and sugar (or artificial sweeteners). We’ve long known that soda isn’t good for health.

But it isn’t the only nutritional bad beverage to avoid.

A recent study published in the journal Circulation revealed that soda has some nasty cousins who are almost as guilty of wreaking havoc on our health.

Energy drinks, fruit drinks, and sweet iced teas share a dishonorable achievement with soda: they have been linked to an estimated 184,000 deaths per year globally (25,000 of those are in the U.S.).

For the study, researchers from Tufts University looked at information from 62 dietary surveys from 51 countries as well as data on the national availability of sugar from 187 countries. The surveys included data collected from 611,971 individuals between 1980 and 2010.

They focused on sugar-sweetened sodas, fruit drinks, sports and energy drinks, sweetened ice teas, and homemade sugary drinks such as frescas that contained at least 50 calories per serving. Beverages that were 100 percent fruit juice were excluded.

The frightening findings? Sugary beverages may have been responsible for 133,000 deaths from diabetes, 45,000 from cardiovascular disease, and 6,450 from cancer.

“This is a single dietary factor with no intrinsic health value causing tens of thousands of deaths per year,” said study coauthor Dr. Dariush Mozaffarian, dean of the Friedman School of Nutrition Science & Policy at Tufts University.

Sugar, you ain’t so sweet

If that wasn’t bad enough news, here’s more: a study published in The BMJ last week found an association between regular consumption of sugary drinks and the onset of type 2 diabetes independent of obesity.

That’s right: even if you are NOT obese, consuming sugar-laden drinks is risky.

Researchers looked at 17 cohorts and more than 38,000 cases, and found that higher consumption of sugar-sweetened beverages was associated with an 18 percent increase in incidence of type 2 diabetes per one serving a day.

And when they adjusted for obesity, there was still a 13 percent increase over those who drank no sugary drinks, found the researchers, led by Fumiaki Imamura, PhD, at the University of Cambridge in the UK.

Imamura said that although there is an abundance of evidence that soft drinks can significantly increase the risk of developing diabetes, it wasn’t clear if the risk was present in the non-obese:

“We identified a lack of clear evidence to tell if soft drinks elevate the risk of diabetes, regardless of obesity status. This lack of evidence attracted us, and we thought the evidence would help further the ongoing policy debate.”

You might be thinking, “Well, okay – I’ll just stick to diet sodas, then.”

Artificially sweetened beverages and fruit juice were both positively associated with the incidence of type 2 diabetes, but the researchers said there wasn’t enough information to draw definitive conclusions.

Previous studies have linked the consumption of artificial sweeteners to diabetes, and we already know that sugar isn’t exactly a health food. But liquid sources of sugar are especially troublesome because of the method of delivery – how long does it take to guzzle a bottle of soda? And, when you consume a sugary drink, is it in place of food, or in addition to it? Studies have shown that people who drink soda usually consume significantly more calories than people who avoid the stuff.

So, what should you drink?

The answer isn’t glamorous or exciting, but it could make a huge difference in your health – water. If you are groaning at the thought of being limited to such a boring liquid, rest assured: you will get used to it.

If you want to kick sugary drinks out of your life and don’t think you can do it cold turkey, try these tricks to make the process easier:

So, are you ready to reduce your consumption of soda or remove sugary drinks from your life? You can do it – you don’t need all that sugar. You are sweet enough already.