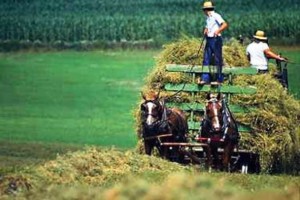 Amish farming has been handed down from parents to children for so many generations that the reasons for doing so are almost forgotten. For example, the rotations of our field crops work so well that they’re seldom questioned. This is a four or five year rotation with corn in a given field every fourth or fifth year. The corn is followed with oats. In the falls after the oats are harvested the stubble is plowed and wheat sowed. This is then top-seeded the following March or April with legume seeds using a hand-cranked or horn type seeder, usually on frozen ground. This is also the time we find the early nesting, horned lark’s nest. The dropping seeds cause enough disturbance to flush the incubating bird.

After the wheat is cut and threshed in July, the stubble is mowed, and almost miraculously, the wheat field converts to a hay field. The next spring and summer several cuttings of hay are made, and then the hay field is pastured in the fall. During the winter the old sod is liberally covered with strawy manure in late winter or early spring the sod is plowed and in may planted again the corn, and the rotation or cycle is completed.

Preserving the Earth for Future Blessings

From an ecological, angle, what has to be bought and added in the form of chemicals to raise a crop of corn in a field like this? Nothing, except the seed corn which is usually treated with a fungicide. With the legumes converting free nitrogen to the soil from the air, no extra fertilizer is needed.

Likewise no insecticides are needed in this field, because in corn following hay there are not crop damaging insects. We have never used a soil insecticide.

Most of us aren’t too concerned if there are some weeds and grasses in our corn. in fact, I want some there. Occasionally we get summer thundershowers that dump several inches of rain in half an hour or less, which is more than even the most absorbent soil can take. It is during storms like this when we depend on a smattering of quack grass and sod waterways to hold the top soil.

Preserving the topsoil can be attributed to the tilth of our soils. Research at Oberlin college shows our traditional, horse-worked farms absorb almost seven times more water before becoming saturated than conventional, no-till farms.

At this time no-till farming with its dependence upon vast amounts of chemicals is being touted as an answer to prayers. This method is promised to give us green fields forever, but they fail to say that these green fields will be strangely silent -gone will be the bobolink, the meadowlark and the sweet song of the vesper sparrow in the gloaming.

By farming and living independent of the electrical grid, the Amish are not contributing, at least not directly, to the destruction of hundreds of farms and communities in southeastern Ohio, where the Ohio power plants spew out sulfur dioxides which are blamed as part of the acid rain soup which is killing forests and lakes in the adirondacks.

Gary Nabhan wrote in the desert smells like rain about two sonoran desert oases. The first one in Arizona is dying because the park service turned it into a bird sanctuary and, in order to preserve the naturalness, removed the Indians who farmed and lived there. The other oasis across the border in Mexico is thriving because it is being tended by a village of Papago Indians as it has been for a long time. An ornithologist found twice as many species of birds here than at the bird sanctuary in Arizona.

I think it is the way it is with small-scale diversified farming. On this type of farm we enhance our place for wildlife rather than being a setriment into a “wildlife area,” I’m positive the numbers and species of wildlife would dwindle.

Last week our family did a survey of nesting birds around our farm buildings. This doesn’t include the bobolinks, redwings, meadowlarks and sparrows in the fields, nor the vireos, tanagers, warblers and thrushes in the woods, nor the rough-winged swallows and kingfishers along the creek. Even though the nesting season is over, we still thought we could get a fairly accurate count of young birds. We came up with thirteen species and over 1800 young fledglings within 200 feet of our house. As Mr. Nabhan’s Indian friend said, “that’s because those birds, they come where the people are. When the people live and work in a place, plant their seeds, and water their trees, the birds go live with them. They like those places, there’s plenty to eat, and that’s when we are friends to them.”

Wes Jackson has often said, “the pleasantness or unpleasantness of farm work depends upon scale-upon the size of the field and the size of the crop.” the Amish have maintained what I like to think is a proper scale, largely by staying with the horse. The horse has restricted unlimited expansion. Not only does working with horses limit farm size, they’re ideally suited to family life. With horses you unhitch at noon to water and feed the teams, and then the family eats what we still call dinner. While the teams rest, there is usually time for a short nap. Another fringe benefit is that God didn’t create the horse with headlights, so we don’t work nights. I haven’t heard of any of our neighbors calling the extension service’s 800-stress hot line.

We have seventy tillable acres which is more than the average farm in our community. We couldn’t take care of more. With this size farm, there is usually something to do, yet we are never overwhelmed by work either.

The Work is Spread Out

Under normal conditions, the work is spread out from spring to fall. The fieldwork begins in March with the plowing of sod. This is leisurely work, giving the horses plenty of time to become conditioned. This is our “quiet time,” a time to listen to god and his creation as we are a part of the unfolding of spring.

In May, glorious May, we plant the corn, turn the cows and horses out to pasture and revel in warblers and morel mushrooms.

Hay making is in June, along with strawberries, shortcakes, pies and jams. The bird migration is over, and summer settles in.

August already hints of autumn and silo filling. The whine of the fillers is heard throughout the land. we fill our ten by forty silo with the help of four neighbors.

Sowing wheat and Macintosh apples mean the month of September.

October is corn harvest and cider making and loving the colors and a serenity only October can offer. As the month draws to a close so does the fieldwork.

A lot of what you may consider recreation we get on our own farm. The year is a never-ending adventure. This year we had four firsts: our first Kentucky warbler for the farm; our first ever luna and imperial moths; and after waiting for over thirty years, I saw my first giant swallowtail butterfly.

The Support of a Community

Probably the greatest difference between Amish and conventional agriculture is the community life or support we have. Outside of the two years away from home when I was drafted, I’ve never lived anywhere else. But it is easy to see that in non-Amish farming communities the farmer that farms traditionally is often considered an eccentric, a person too stubborn to adapt. Around here the conventional farmer is the unconventional one.

Eight years ago I had an accident which required surgery and a week in hospital. My wife tells me the first words I told her in the recovery room were, “Get me out of here. The wheat has to be cut.” Of course she couldn’t, and I need not have worried because we had neighbors.

While my dad binded the wheat, the neighbors shocked as fast as he cut. When his team tired, my brother brought his four-horse team, and by support-time the 12 acre field was cut and shocked.

This year the neighbor that was first to help us last year needed help. Since a bout of pneumonia a month ago, he hasn’t been able to do much. So last Thursday six teams and mowers cut eleven acres of alfalfa hay. Then on Saturday afternoon with four teams and wagons and two hay loaders and fifteen men and about as many boys, we had the hay in his barn in less than two hours.

Actually we spent almost as much time afterwards sitting in a circle beneath the maple tree with cool drinks and fresh cookies, listening as one of the neighbors told of his recent trip. He and a friend visited draft horse breeders in Illinois, Iowa and eastern Nebraska, and what a story he to tell of nice horses and nice people, of the worst erosion he had ever seen from those Iowa hills following eight inches of rain, and how those Iowa farmers rained invective down on our president. “Ach,” he said, “all they want is more government handouts.”

I couldn’t help but think of my young friend who got married last September, and then bought his dad’s machinery and livestock and rented a farm. He really worked on that debt, milking by hand, selling grade b milk, tending a good group of sows, cultivating corn twice, some three times with no herbicides. As he and his wife are now nearing the end of their first year of farming, most of their debts are paid off. He didn’t tell me this, because he’s much too humble, but he did say to me while threshing, “you know, farming is good.”

This article was originally posted at Connexions