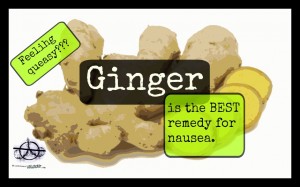 Nausea.  That horrible, churning feeling in your stomach that makes it difficult to think about anything but how awful you feel.

Whether your nausea is caused by a stomach virus, something you ate, motion sickness, or a symptom of a different issue altogether, one thing is for sure: you really want to feel better fast.  Vomiting can be debilitating and sometimes even painful.

Many people reach for an over-the-counter antiemetic medication like Dramamine (in the US) or Gravol (in Canada). The active ingredient in both of these medications is Dimenhydrinate. Dimenhydrinate causes drowsiness that is sometimes extreme, as well as a thickening of mucous in the lungs, which is contraindicated for certain pre-existing conditions.  Some people also purposely take an overdose of Dimenhydrinate for its hallucinatory properties.

So, with this knowledge in mind, when my then-10 year old had a really bad stomach virus, I wasn’t interested in giving her a medication that had the potential to send her on a bad “trip”.  We decided to try something that was new on the market – “all-natural” Gravol Ginger Tablets.

Ginger, in its unprocessed form,  is spicy, pungent, and delicious.  It has been recognized as a multi-purpose remedy for thousands of years.

Indians and Chinese are believed to have produced ginger as a tonic root for over 5000 years to treat many ailments, and this plant is now cultivated throughout the humid tropics, with India being the largest producer. Ginger was used as a flavoring agent long before history was formally recorded. It was an exceedingly important article of trade and was exported from India to the Roman Empire over 2000 years ago, where it was especially valued for its medicinal properties. Ginger continued to be a highly sought after commodity in Europe even after the fall of the Roman Empire, with Arab merchants controlling the trade in ginger and other spices for centuries. In the thirteenth and fourteenth centuries, the value of a pound of ginger was equivalent to the cost of a sheep. By medieval times, it was being imported in preserved form to be used in sweets. (source)

According to the textbook Herbal Medicine: Biomolecular and Clinical Aspects, there is a very good reason that ancient healers used the humble looking root in their practices.

Because ginger and its metabolites appear to accumulate in the gastrointestinal tract, the consistent observations of ginger exerting many of its effects in this area are not surprising. Ginger has been purported to exert a variety of powerful therapeutic and preventive effects and has been used for thousands of years for the treatment of hundreds of ailments from colds to cancer.

The most common and well-established use of ginger throughout history is probably its utilization in alleviating symptoms of nausea and vomiting. The benefits and dangers of herbal treatment of liver and gastrointestinal distress have been reviewed (Langmead and Rampton 2001), and several controlled studies have reported that ginger is generally effective as an antiemetic (Aikins Murphy 1998; Ernst and Pittler 2000; Jewell and Young 2000, 2002, 2003; Langmead and Rampton 2001; Dupuis and Nathan 2003; Boone and Shields 2005; Borrelli et al. 2005; Bryer 2005; Mahesh, Perumal, and Pandi 2005;Chaiyakunapruk et al. 2006; Thompson and Potter 2006; Quimby 2007). The effectiveness of ginger as an antiemetic has been attributed to its carminative effect, which helps to break up and expel intestinal gas. This idea was supported by the results of a randomized, double-blind trial in which healthy volunteers reported that ginger effectively accelerated gastric emptying and stimulated antral contractions (Wu et al. 2008). Previously, [6]-gingesulfonic acid, isolated from ginger root, was showed to be effective against HCl/ethanol-induced gastric lesions in rats (Yoshikawa et al. 1992). This compound showed weaker pungency but more potent antiulcer activity than [6]-gingerol or [6]-shogaol (Yoshikawa et al. 1994).

Ginger root is commonly recommended for preventing seasickness (Schmid et al. 1994) and is found to be superior to dimenhydrinate (Dramamine) or placebo against symptoms of motion sickness (Mowrey and Clayson 1982).

Armed with this information, I went to the pharmacy to check it out and the price was almost $20 for a mere 20 pills. I read the ingredients, and aside from the shellac that was on the outside to make it look pretty, there was only one active ingredient: ginger.

I popped over to the herbal supplement aisle and found this stuff: Nature’s Way Ginger Root.  The bottle was less than $5 and contained 100 tablets.

I purchased the Nature’s Way bottle as opposed to the outrageously expensive name brand. It worked like a charm to alleviate my daughter’s nausea, without the horrible drowsiness caused by the chemical antiemetic.  Ginger is frequently given to pregnant women and to people undergoing chemotherapy to help reduce nausea. However, the bottle says that pregnant women should consult their practitioners before taking ginger.

We now keep ginger tablets on hand for tummy bugs, and it goes in the vehicle with us on road trips, in case of motion sickness.

Even Time Magazine has sung the praises of ginger, suggesting the following uses:

If you haven’t added this to your garden and your home herbal remedy cabinet, it’s time that you did!