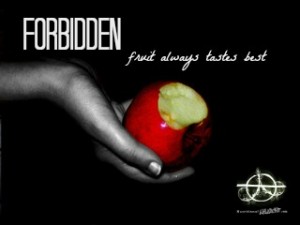 The more things are forbidden, the more popular they become.  – Mark Twain

An early childhood education professor said something that surprised me when I was taking her class many years ago.

She said, “When it is lunchtime in your classroom, make sure you don’t tell your students what to eat. Give them their lunch and let them make the decisions. If they want to eat chips or cookies and disregard their sandwich or fruit, so be it.”

I was confused by that statement. Shouldn’t I, as an early childhood educator, teach my students about nutrition and direct them towards making healthful choices?

The professor explained:  “When you tell a child that they can’t have their cookies until they eat all of their sandwich and their fruit, you are sending them a message that some foods have more value than others.”

Wait…but don’t they? Isn’t an apple more valuable than a snickerdoodle?

She clarified: “Making a child eat a sandwich before they can have a cookie makes the cookie appear more important…like a prize that is ‘won’ after doing a chore.”

“It also teaches them to ignore their own fullness signals – they might eat all of a sandwich they didn’t really want just to be able to have chips, and then a cupcake or cookies. So, they end up overeating.”

Sort of like when I make myself eat a salad so I can have a brownie.  Got it.

Many years later, I met a woman who said, “Life is uncertain – eat dessert first.” I thought that was a clever expression and laughed at the thought. It wasn’t until I went to lunch with her that I learned that she was serious. She DID order – and eat – dessert before her meal.  She explained that if she really wants a particular dessert, she will have it before her meal – or in rare cases, instead of her meal. This satisfied her and prevented her from overeating.

Now I want you to think about the rules for eating that you impose upon yourself.

Is there a particular food (or an entire food group) that you have made off-limits?

For example, do you tell yourself you can’t have cheese, potatoes, ice cream, or chocolate?

What happens when you tell yourself you can’t have that particular item?

I bet you think about it more. You might even obsess over it…dream about it…and end up eating a darn lot of it once your resolve breaks and you give in.

And then you feel guilty, and promise yourself that you won’t slip up again.

And the cycle continues. And you berate yourself for it. And you wonder why you are so weak and what happened to your willpower.

And you believe that you will never reach a healthful weight, or fit into your favorite jeans again, or feel attractive.

What if you stopped obsessing…and let go?

What do you think would happen?

Here’s another question, and it is a very important one:

How long have you been on a diet?

According to various sources, the average woman spends 17 to 31 YEARS of her life dieting.

Approximately 80% of women in the US are not satisfied with their appearance.  90% of British women have been on a diet of some kind in their lifetime.

More than 10 million women in the US alone suffer from eating disorders.

About 45 million Americans diet each year.  Weight loss is a $33 BILLION industry.

How many diets have you tried?

US News & World Report does a diet evaluation and ranking every year.   For 2014, they reviewed 32 of the most popular diets.  THIRTY-TWO.  And there are many, many more. Have you seen the diet book section at your local bookstore lately?

What on Earth is going on?

With all of these diets, something has to work, right?

Research shows that 95% of people who DO lose weight on a diet gain it back within three years.  Beyond three years, the statistics are even worse.

It is often said that insanity is doing the same thing over and over and expecting different results.

Insanity is dieting over and over again and expecting different results.

I worked as a nutritionist, hypnotherapist, personal trainer, and weight loss counselor for many years.

I’ve also had personal experiences with body image issues, weight fluctuations, and dieting that began far earlier than my professional career in the field.

This means that I talked about food, calories, body fat, metabolism, weight loss, and exercise EVERY DAY for YEARS.

I still keep up with the latest nutrition, weight loss, and dieting research and statistics.

And, I spend a LOT of time thinking about, learning, and LIVING this stuff.

I’ve come to the realization that dieting, obsessing over food, constantly worrying about calories, and making certain foods forbidden is exhausting – and harmful.

Sure, it is a good idea to reduce your body fat if you need to.

But instead of worrying about every calorie, gram of fat, and serving of carbs, consider shifting to eating healthful REAL food MOST of the time, drinking enough water, moving your body, and loving and valuing yourself no matter what size you are.

Consider letting go of obsessions, counting, forbidding, and guilty feelings that have been part of your life for far too long.

What do you think would happen if you gave that a try?

Diet Cults: The Surprising Fallacy at the Core of Nutrition Fads and a Guide to Healthy Eating for the Rest of US

The Rules of “Normal” Eating: A Commonsense Approach for Dieters, Overeaters, Undereaters, Emotional Eaters, and Everyone in Between!

The Food and Feelings Workbook: A Full Course Meal on Emotional Health

The Rebel Diet: Break the Rules, Lose the Weight